Human Rights in Masoala is dedicated to drawing attention to injustices committed against the local population in Masoala, Madagascar, in the name of Nature Conservation.

The Masoala National Park was inaugurated in 1997 and comprises half the Masoala peninsula on Madagascar’s northeast coast (see map below). The park enjoys the support of various North American and European conservation organisations (among them the Wildlife Conservation Society and the Zurich Zoo). Many farmers in Masoala have lost a substantial part of their customary land when it was included into the park. By encapsulating the land local people rely on for their subsistence, the park has caused increasing poverty among an already poor population. Moreover, it threatens the livelihood of future generations. Local farmers, therefore, strongly disagree with the park’s present extension and boundary. “Añaty rôva izahay”, they would often say: “We are trapped like chicken inside a chicken coop”. 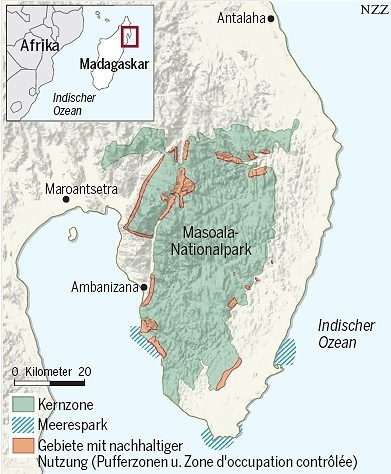 The expropriation of local or indigenous people’s customary land for oil palm plantations or by unscrupulous logging companies is met with considerable criticism and resistance from around the world. For those who loose their land, however, it makes little difference whether they loose it to an industrial enterprise or to a Nature Conservation project. Their livelihood is threatened just the same. We side with the farmers in Masoala, and we demand that their right to a dignified life, as they conceptualise it, be respected and acted upon by conservation organisations. This must include the recognition of local people’s customary land rights (Compare Articles 17, 22 and 25 in the Universal Declaration of Human Rights)

Human Rights in Masoala endorses the principle of Free, Prior and Informed Consent. In 2004 the United Nations Commission on Human Rights embraced this principle: “Free, prior and informed consent recognises Indigenous peoples’ rights to their land and resources and respects their legitimate authority to require that third parties enter into an equal and respectful relationship with them, based on the principle of informed consent.” (for more information: FSC / Oxfam)